With every decision you make, ask yourself "Is this good for the company?" 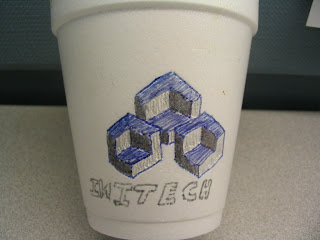 Posted by Andrew at Wednesday, May 28, 2008 No comments: Links to this post

The Unfortunate Demise of Sax and Violins. 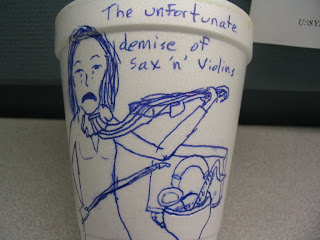 Disclaimer: I have nothing against music featuring either violins and/or saxophone. I enjoy that music very much. In fact, I am listening to Mozart's Symphony No. 40, Allegro Assai at this very moment. In case you haven't noticed, my art tends to be a bit on the dismal side.

Besides, I could I resist the pun.

Frankly, I'm just impressed that I could draw a broken violin on my first try.
Posted by Andrew at Wednesday, May 21, 2008 No comments: Links to this post

I Have No Chemistry with Chemistry

I would like to euthanize a nasty rumour floating around about me. A couple of years ago I took a intro chemistry course by correspondence. My final mark ended up being 94%.

Not quite. Here's why:

The average university course takes about 13 weeks, with 3 hours of class per week. Science classes that have a lab component often have a 3 hour lab every week. That's 6 hours of classroom instruction per week.

The rule of thumb I heard when going to school was that for every hour you spent in the classroom you should spend two hours outside class doing homework and studying.

My average mark in university was 86%. That's an average of 0.358 percentage points per hour of course.

I know most courses don't require that much time to complete. I don't think I followed the 2:1 study time requirement for any of my courses in college or university. I'm being generous for the sake of argument.

Compare to a class I was good at: Computer Data Structures. I went to most of the lectures. I typically slept, or read a novel during class. I did the assignments. I probably put 1.5 hours/week into that course (including any lecture time when I may have been paying attention).

Chemistry took me from June to November to finish. That's 28 weeks (compared to 13 for the average course). From June until September I worked on chemistry for about 41 hours/week. (5 hours a day Monday through Friday, and 8 hours on Saturdays and Sundays). That happened for about 16 weeks.

Starting about a week before my exam and midterm, I took practice tests (which were very similar to the real tests). My marks were in the 50s and 60s. Those practice tests allowed me to see my strengths and weaknesses. I had about a week to work on them. When I wrote the tests, and got a 90% and 91%. Combined with my lab marks, and assignment marks I got a final mark of 94%.

That's an average of 0.062 percentage points per hour worked.

That's awfully low for something I'm supposedly good at.

In order to do 1508 hours of study for a normal course of 13 weeks, you'd need to study for more than 16 hours per day, every day.

Here's a table for the visually inclined:

And what did I get from it? What do I remember a year an a half later? Here is a list of things I remember from that class: 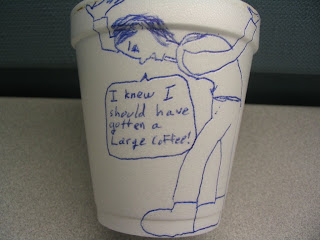 He's saying "I knew I should have gotten a large coffee!
Posted by Andrew at Wednesday, May 14, 2008 No comments: Links to this post

Yesterday I received a package in the mail. It was my camera from Canon. A few weeks ago I mentioned that my camera broke and that there would be no further coffee cup art until it was fixed.

There was a note with my camera with my description of the problem, along with some other technical details, but nothing about if the problem was fixed or not.

I put batteries and a memory card in, turned the camera on, and it worked.

I am in the process of taking pictures of my recent coffee cup art. They will return to this blog next Wednesday.

It was a bit of a pain being without a camera though. I sure wish I had my camera last week when I saw Big Foot kidnapping the Lindberg Baby from Amelia Earhart.
Posted by Andrew at Wednesday, May 07, 2008 No comments: Links to this post

Blood From A Stone

Today's Article is interesting. The Recording Industry Artists of America (RIAA) is suing a homeless person! I'm really not sure how to feel about this. One the one hand, it still bugs me that big business is suing Joe Six-pack. On the other hand, there's a sort of humour to the idea of suing a homeless man!? Are they insane? Have they no discretion? How much money do they think they're going to get from this guy?

If they win, how will they collect their winnings? Are they gonna go after his shopping cart and collection of grocery store bags?
Posted by Andrew at Friday, May 02, 2008 No comments: Links to this post