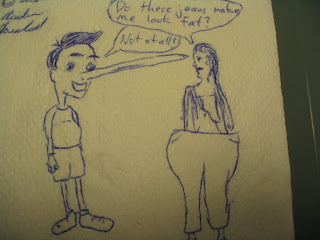 The woman is asking "Do these jeans make me look fat?"

The very badly drawn Pinnochio is saying "Not at all!"
Posted by Andrew at Wednesday, December 31, 2008 No comments:

A little ago I wrote about my family's non-materialistic Christmas this year. Today was that day.

It started out the same as usual. We had our Christmas morning brunch. We did the Advent Wreath and devotional. Then we moved into the living room to unwrap Christmas presents.

I know I said we weren't doing presents this year. And we really weren't. Many of these presents were just chocolates, or books, or DVDs that were on sale wrapped or stuffed into gift bags. 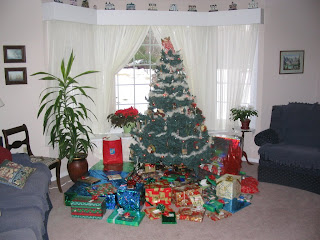 And here is this year's: 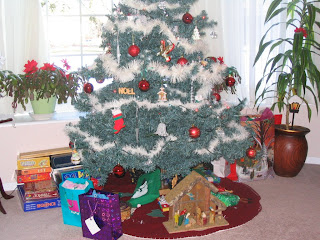 Then came the highlight of the day: Dance, Monkey! Dance! My dad played "Silent Night" on the piano. It was the first time he played the piano in many years. He played with both hands. That's beyond my skill level.

My mom played a couple of tunes on the bells. She did a good job too.

My brother played a song from Sound of Music. I don't think I can pronounce it. And I certainly can't spell it. He learnt to play it by ear. He's really good at that.

My sister will cook us a meal soon.

I unveiled my piece of "art." Normally I would show this on my Coffee Cup Art series. But here it is: 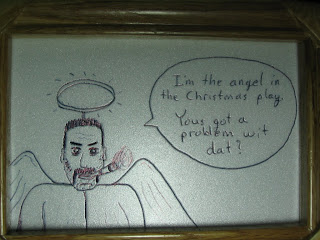 The rough-looking character is saying "I'm the angel in the Christmas Play. Yous got a problem wit dat?"

And that was out Christmas. We all enjoyed not having to run around doing Christmas shopping.
Posted by Andrew at Monday, December 29, 2008 No comments: 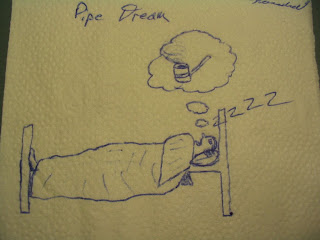 It's a guy having a pipe dream.
Posted by Andrew at Wednesday, December 24, 2008 No comments:

I Thought of it First

How do you feel when you do some work and later find someone else did the same thing?

Long time readers will remember in July of 2008 I published a Coffee Cup Art entitled "Don't Maze Me, Bro!" This was the piece: I noticed that "don't maze me bro" has become a popular search term leading to this blog. So I Googled it. And look what I found:

This can be found here:
http://www.cartoonistgroup.com/store/add.php?iid=28677.

What do you think? Leave a comment with your suggestion/vote.

UPDATE: And now I find this: Now What Do I Do?

Just last week I shared an article on the evil record industry.

Earlier this week I wrote a piece, to be published today, on the OC Transpo strike.

What a difference a week makes!

Almost everything I wrote in the bus strike piece is out of date. The city and the union may start talking tomorrow. I thought that in this case the drivers weren't getting any sympathy from the public. Then I heard that lack-of-sympathy is shifting to the city. I won't be publishing that piece.

Then this! According to Today's Article, the record industry (RIAA) is changing their strategy. They've decided to stop suing the little guy. They're going to start working with ISPs to target piracy.

I want to be clear on an issue. If you've been reading my blog for a while, you know how I feel about the recording industry. You probably think I'm some kind of libertarian who believes all intellectual property should be free to everyone.

That's not the case. My CD collection is over 200. I used to wag my finger at people who "shared" music. Then two things happened: I started to only purchase independent music.

The recording industry isn't dropping any outstanding lawsuits. They're just not launching any new ones.

So, what do I do now? Do I buy some music? Do I continue the boycott until they drop the lawsuits? Maybe just buy some non-DRM music from iTunes Music Store? I believe good behaviour should be rewarded, and I've had my eye on David Gilmour's Live in Gdansk.

Before I decide that, I will say this to the recording industry: 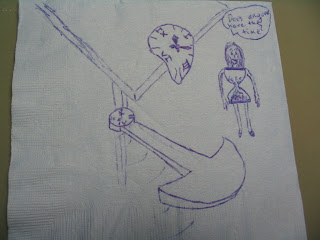 We must have been talking about time when I drew this.

The clock sliding off the table is a rip-off of Dahli's work.

The clock with the huge pendulum is a rip-off from a Pink Floyd animation for their song Time as seen in the Delicate Sound of Thunder.

The woman, with the perfect hour-glass figure, is asking "Does anyone have the time?" I should have had her say "Does anybody have the time?" It's punnier.
Posted by Andrew at Wednesday, December 17, 2008 No comments:

I still maintain it's wrong to not "steal" from the recording industry (RIAA).

According to today's article they're suing a 19 year old woman, Ciara Sauro, who has pancreatitis, and is a transplant patient. She has to go to the hospital every week. She also suffers from depression. Life is expensive for this young woman, and her mother, with whom she lives (who makes $8.25/hour). Not only is it expensive, it's likely very busy.

The recording industry wants thousands of dollars from her for sharing 10 songs on the internet. I think that's excessive.

They sent her a 60 page document explaining they want thousands of dollars, and that she has to respond within a certain amount of time or the judgement is ruled, by default, against her.

Ciara didn't respond on time. So the judgement has been made against her. Now a lawyer has offered to help pro bono. He'll try to get the courts to reopen the case.

I can't blame her for not responding on time. First of all, she would probably need a lawyer just to understand the document she received. Her life situation makes her poor and busy. This is just one more thing she does not need to deal with.

She and her mother allege the internet account in the lawsuit belongs to her father. He opened the account after he moved away from them.

I'm not sure if this is worse than the time they tried to sue a homeless guy, or the time they sued a stroke patient, but it's still repugnant.

The RIAA is a bunch of recording companies, including, but not limited to, Sony BMG, EMI, Universal, Integrity, Maranatha, and many others.

Here is a list of RIAA labels. At the top of that page you can search for an artist or album to see if they're associated with the RIAA.
Posted by Andrew at Friday, December 12, 2008 1 comment: 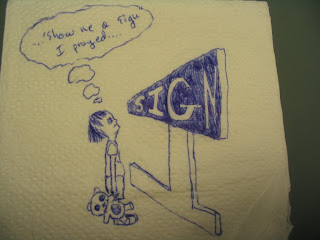 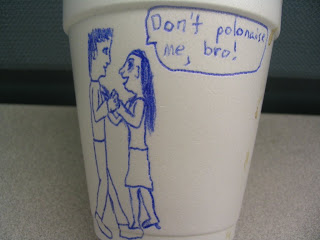 The woman is saying to the man "Don't polonaise me, bro!"

A polonaise is a slow Polish dance.
Posted by Andrew at Wednesday, December 03, 2008 2 comments: