If you were driving down the road, talking on your cell phone and there was a clown on a unicycle, do you think you'd see him? Would it make a difference if you used a hands-free phone?

Probably not, according to today's Article.

The reason is obvious to those who know anything about attention. You can only really pay attention to one thing at a time. We multitask the way a computer does, but we're not nearly as good at switching from one process to another. The problem is not that you're holding something in your hand. The problem is attention.

If you think the problem is holding something in your hand, try this. The next time you're driving, try holding something in your hand. Heck! Try holding your phone in your hand without using it to talk. There shouldn't be significant degradation in your driving skills. (This may be hard for you to measure. Most people don't notice the degradation in their driving skills when talking on the phone, fiddling with the radio, or polishing off a 2-4.) In fact, if you have an automatic transmission in your car, you can regularly drive with one hand.

Furthermore, if driving with only one hand was as unsafe as driving drunk, then everyone who's either missing an arm or hand shouldn't be allowed to have a drivers licence.  And anyone with an unusable hand, due to injury or something, should lose their licence until they recover.

I guess the biggest problem would be for people who talk with their hands.  If they're holding their phone with one hand, and gesturing with the other, then they're not steering their car.

So, if the problem isn't having something in your hand, but attention, then why are we passing laws that say "It's okay to be distracted when you drive, as long as you're not distracted while holding something in one hand."?
Posted by Andrew at Friday, October 30, 2009 2 comments:

This may come as shocking news to you, but according to Today's Article, men actually get stupider in the presence of beautiful women. But, attractive men don't have that effect on women.

Jeez!  I could have told you that!  And I could even have told you why....as long as their wasn't a beautiful woman near by.
Posted by Andrew at Friday, October 23, 2009 No comments: 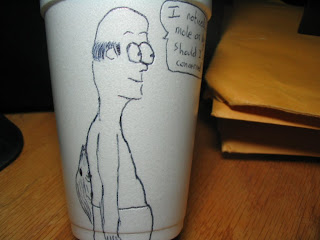 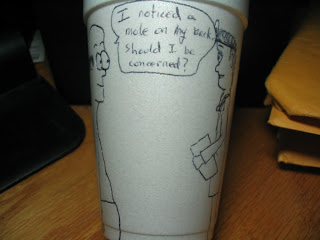 This guy discovers a new mole on his back. Incidentally, according to this article in New Scientist, the Naked Mole Rat never gets cancer.
Posted by Andrew at Wednesday, October 14, 2009 No comments: 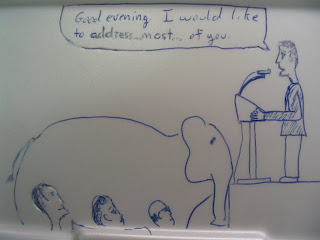 Nobody wants to address the elephant in the room.
Posted by Andrew at Wednesday, October 07, 2009 No comments: