That's One Less Right We Have

In a recent post I stated that when arrested Canadians do have a constitutional right to remain silent. According to today's article this is no more.

Well, it still does technically exist. But it seems more imaginary than concrete. Yes, you can remain silent. You have that right. You don't have to talk during interrogation.

But police can still interrogate you to their heart's content.

I haven't been in that situation, but I can imagine it would be hard to not say anything when they keep harping on you. Let's compare mental states, shall we? But before we do, take a look at this second article saying we have one centre in our brains for self-control. After exercising that area, it gets tired and becomes harder to use. From the article:
"As humans, we have limited resources to control ourselves, researchers say; all acts of control draw from one source. So when using this resource in one domain, such as dieting, we’re more likely to run out of it in another domain, like studying hard. "
The police, usually with more than one present, have strength in numbers. They're the hunting, not the hunted. They're not being worn down. At the end of the day, they take you back to your cell. They go home to their families, have a sleep, come back the next day ready to roll again.

The suspect has had his life interrupted. He's taken from his world and locked in a cell with a bunch of other people he likely doesn't know. He's constantly being hounded with questions by trained interrogators. They're professionals. He may have never been in this situation before. He may know he doesn't have to say anything, but his resistance is wearing down. You can only say "I have nothing to say. I don't want to talk about it." so many times. While the police are at home being rejuvenated and refreshed with their families in their comfortable houses, delicious dinners, and warm beds, the suspect is in a cell with a number of others, with no privacy, no comfort, no freedom, and probably little-to-no sleep. Only fear and fatigue.

It is also known that with enough interrogation you can get people to confess to just about anything.

Wow. The Supreme Court of Canada really dropped the ball on this one.

If you live in Canada then I implore you to write your MP. This ruling cannot be fixed in the courts. The highest court in the land made this ruling. The fix now needs to come from parliament.

You can find out who your MP is, by your postal code, from this page.
Posted by Andrew at Friday, November 30, 2007 No comments: Links to this post 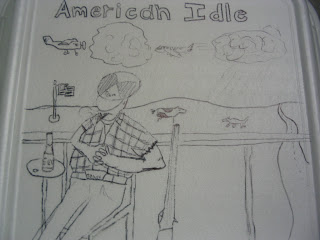 Posted by Andrew at Wednesday, November 28, 2007 No comments: Links to this post

A Good Use For An Extra Dimension

Sometimes you need to schedule events pretty far in advance. By the time the event is to happen you've forgotten all about it. Thanks to computers we have a solution. You put that event in a calendar program, like Outlook, Google Calendar, KCal, or Apple's iCal. You can also use a PDA, an iPod, a cell phone, or if you're a geek like me, your watch.

When the event approaches, the program reminds you. You can usually tell the program to either send you an email, open a pop-up reminder, ring a bell, etc.

This works very well for events, but not for physical things. Someone just sold me a ticket for a draw that won't happen for another 4 months. I will likely loose the ticket, or forget about the draw. I would like to be able to put this ticket in a place where I won't see it again until the day before the draw.

Wouldn't it be neat if scientists could develop a way to use one of the other 7 or so dimensions some predict our universe might be made up of? We're only exposed to three. Some people argue that time is a forth. I could just stuff my ticket into the fifth dimension, for example, and take it out at the appropriate time. Of course, this will still allow me to forget about it. It would be better to put it some kind of space-time warp where I could send it to the future. From now until the the before the draw date, the ticket wouldn't exist. Then suddenly, on that one day *puff!* there's my ticket!

</useless_post>
Posted by Andrew at Monday, November 26, 2007 No comments: Links to this post

Today's article tells us of common Facebook grievances. They include posting pictures of yourself with uglier people to make yourself seem more attractive, using the relationship status option, "stealing" friends, requesting Facebook friends that you have never met in real life, and more.

My only real grievance is how some people write things on people's wall that are better left for private messages. Some people seem to lack discretion in that area.

That's why my Facebook wall has been turned off. I had turned it on at one point, but only took a couple of weeks before someone wrote something on it that should have been private.

Yes, I know you can delete wall messages. But There are some days I can't check Facebook. So a private message can exist on wall for a day or two before it's deleted. Yet, the message shows up on other people's news feeds almost right away. It's just easier to turn access to my wall off.

If I can figure out how to exclude individual people from writing on my wall, without deleting them as a friend, I'll probably turn it on again.

In the meantime, if you want to send me a message, either send me a Facebook message, leave a comment on my blog, MSN me, or best of all, email me.

UPDATE:
I found a way to turn your wall on, but to not let certain people have access to it:This prevents some people from seeing your wall.

You're welcome.
Posted by Andrew at Friday, November 23, 2007 No comments: Links to this post

Email ThisBlogThis!Share to TwitterShare to FacebookShare to Pinterest
Labels: Today's Article, What Grinds My Gears 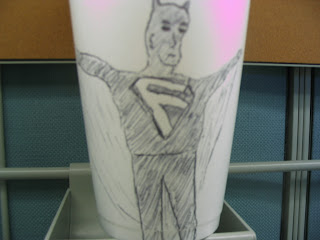 Posted by Andrew at Wednesday, November 21, 2007 No comments: Links to this post

Lately I've been having trouble sleeping. When I lie down at night I get to sleep pretty quickly, but then I wake up a few hours later. I don't wake up groggy so I can just close my eyes and go back to sleep. Instead I lie wide awake. Awake enough to operate heavy machinery. I drift off back to sleep about 10 minutes before my alarm sounds.

If you can wake up as a different person, can you wake up in another city?
Posted by Andrew at Monday, November 19, 2007 2 comments: Links to this post

According to today's article the Copyright Board of Canada has approved a new fee to be placed on "legally" downloaded music. So, when you buy a song from the iTunes Music Store, Puretracks, etc. 3 cents goes to the recording industry to compensate artists for people downloading music and not paying for it. (I hesitate to call it "illegal" downloading because it's not strictly illegal in Canada.)

How do you like that, gang? You're being taxed to pay for people doing something "illegal" that's not actually illegal. So if you're like me and want to stick it to the record companies, it's a little harder now. So now I can't buy a song by an independent artist from the iTunes Music Store. 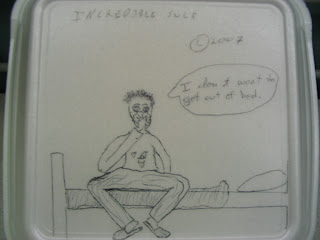 Posted by Andrew at Wednesday, November 14, 2007 No comments: Links to this post

Today I have a question for all of this blog's readers, or anyone who happens to stumble across this post.

What would you say makes a job a good job, or a bad job? I'm not talking about performance, like "Good job out there, son!" I'm talking about jobs as in career-type things.

What was your best job? Why?

What was your worst job? Why?

Leave a comment (anonymous or otherwise), email me, or talk to me in person. I'm just interested in how people see a job as being a good job or a bad job.
Posted by Andrew at Monday, November 12, 2007 2 comments: Links to this post

Email ThisBlogThis!Share to TwitterShare to FacebookShare to Pinterest
Labels: Random Musings, What I want to know is....

Turn Your Radio Down

In Today's article a UK auto-body chain is being sued for copyright infringement.

How did they violate copyright law? They played the radio so loud that the public could hear it.

Normally this is where I'd rant about the idiocy and greed of the recording industry, and use that as a reason to incite you to "stick it to the man" and download music using your favourite peer-to-peer file sharing system. But the article speaks for itself. Heck, what I've told you speaks for itself.
Posted by Andrew at Friday, November 09, 2007 6 comments: Links to this post 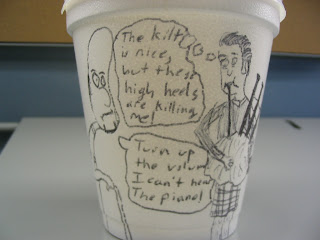 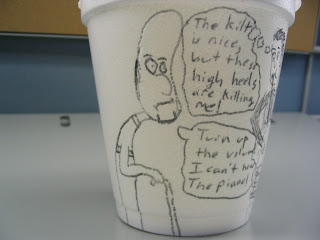 The Scotsman: "The kilt is nice, but the high heels are killing me!"
The Old Man: "Turn up the volume! I can't hear the piano!"
Posted by Andrew at Wednesday, November 07, 2007 No comments: Links to this post

Looking For A Perl Of Wisdom

Learning new technologies can be a double-edged sword. On the one hand, lots of free documentation is readily available on the internet. On the other hand, most of it is not written by writers, but by techies. Techies (like myself) tend to make terrible writers.

Right now I'm trying to deepen my knowledge of a programming language called Perl. There's tons of useless documentation on Perl.com. I say it's useless because it's not written very well. It's riddled with spelling mistakes. Spelling mistakes in technical documentation can be bad. The right kind of error in the right spot makes you ask the question "Wait...is that a typo, or does that word actually mean something special I don't know about?"

And you can't find the documentation from the home page. I had to find it by Googling something specific.

I think programmers approach technical writing with certain assumptions of the reader's knowledge. A good writer makes no such assumptions, at least without stating the assumptions.

I find a great divide exists in technical writing. There are three broad levels of expertise. I'll call them "beginner", "intermediate", and "advanced." Documentation written for beginners is necessarily simple. It's aim to get the reader from knowing nothing on a subject to being functional.

Documentation for intermediates is to bridge the gap between beginner and advanced. It assumes you're familiar with beginner level concepts.

In my experience, very little intermediate documentation exists. I'm in the unfortunate position of being intermediate on many computer technologies. Books for Dummies and Complete Idiot's Guides don't do much much good. Many other books would require a lot of research effort just to read.

Where's the documentation for intermediate's like me?!
Posted by Andrew at Monday, November 05, 2007 8 comments: Links to this post

Email ThisBlogThis!Share to TwitterShare to FacebookShare to Pinterest
Labels: I Program Computers, What Grinds My Gears

Last week we saw an article dealing with minimum sentences for drug dealing in Canada. Two weeks ago we saw a woman having to pay the RIAA $222 000 for downloading 24 songs.

Last week I promised an example of a deterrent not working.

According to today's article despite all the law suits going on, use of peer-to-peer music sharing is increasing.