When I tell you guys to download music, I don't mean you should also purchase it!

According to today's article, a Canadian independent study was commissioned by the government. They found that people who download music using a peer-to-peer file sharing system are also more likely to purchase it.
Posted by Andrew at Friday, December 28, 2007 1 comment:

A moment in the office. Or, at least I assume so. I'm on vacation in Halifax! 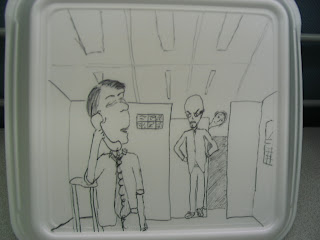 Posted by Andrew at Wednesday, December 26, 2007 No comments:

The McQueen's got their Christmas Tree.

Max is happy because we finally have indoor plumbing.
Posted by Andrew at Monday, December 24, 2007 No comments:

Email ThisBlogThis!Share to TwitterShare to FacebookShare to Pinterest
Labels: Life With The McQueens, My fish died today

I Suspect The Canadians

They did it once, they'll do it again. 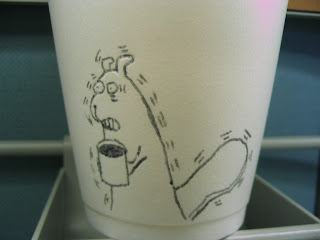 Posted by Andrew at Wednesday, December 19, 2007 No comments:

Christmas Should Be Delayed

I think Christmas should be delayed until sometime in the last 2 weeks of February.

The time of the year we celebrate Christmas, especially from a Christian point of view, is arbitrary at best. We know that Jesus was most likely not born on December 25. We know that we don't really know when Jesus was born.

I am writing the blog post well in advance. There aren't too many lights out right now, but soon there will be. The lights. The decorations. They give one a morale boost in the dreary winter. As summer dies a long death and gives way to winter, the days get shorter, the temperature falls, leaves change colour and fall off the trees. The next thing you know the sky spews for ice and snow. For the next several months that's all we have to look forward to until Spring comes around.

Not all is lost. We have Christmas to look forward to. We take a week, or two, and spend time with family. The lights help offset the effects of SAD. Then Christmas is over. Then we have one week before the biggest party of the year, New Year's Eve. After that we have January, February, and maybe March, depending on your climate. In those months there's not much to look forward to. Nothing to celebrate, except maybe Easter. Easter may come in April. We also don't make a huge deal over Easter. Not like we do with Christmas.

If we moved Christmas to the end of February, then we'd have it to look forward to all through the winter. We could put up the lights and decorations in December, or maybe right after New Year's Day. It would really offset the dreariness of the long, cold winter. Then, once Christmas was over and done with we'd have Spring to look forward to.

There are a few other changes I'd like to make to Christmas. We could do away with the materialism of it all. We're killing the planet with our consumerism. We could trade the pagan tree in for, say, a manger.

To be clear, my main point of moving Christmas is essentially to have the pretty lights for longer, making winter easier to get through, not for Christians to take back Christmas, although I wouldn't be opposed to that.
Posted by Andrew at Monday, December 17, 2007 1 comment:

After 6.5 years away, I can't help but wonder about how long it will take him to clear his Inbox when he gets out. 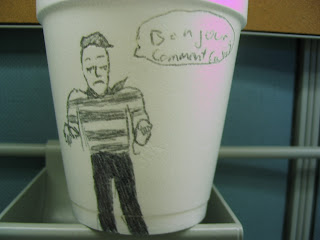 Posted by Andrew at Wednesday, December 12, 2007 No comments:

I think it's time for an update on my car situation. For those of you new to this blog, you might want to read my previous four posts on my car-buying adventures, starting with Post 1.

When I left you in Part 4 I had sent in a form to the CRA to get my Nova Scotian provincial tax money back. The only thing the form requested from me was that I fill in the form, and send the original bill of sale with the form. I did that.

Four months later on August 16 I received a letter from the CRA entitled "Notice of (Re)Assessment GST/HST Rebate Application". They rejected my application for a rebate because I did not send in proof that the vehicle has been moved from Nova Scotia to Ontario.

It makes sense that they would want to see proof of movement. But, as the Bible says, "Ask and ye shall receive." (Matthew 7:7). But the CRA didn't ask. Until now. So I had to resubmit my rebate application, this time with proof that I registered the car in Ontario.

On December 4 I received a letter from the CRA saying "We got your request for a (re)assessment, and we are looking at it. We will send you the results in another letter."

It seems to me that it would save time, and money to skip that step, and just send me the results. But, that's just me.

I'm still awaiting the results. I'll let you know what happens next.

UPDATE:
On December 14, over 8 months since this whole fiasco began, I received a cheque from CRA to reimburse my Nova Scotian tax.

That closes this story. I hope you enjoyed reading it as much as I enjoyed writing it, and way more than I enjoyed living it. The morale of the story: Don't buy a car in a province other than the one in which you live.
Posted by Andrew at Monday, December 10, 2007 3 comments:

He's saying "Nary a lass can out dance William Wallace!" 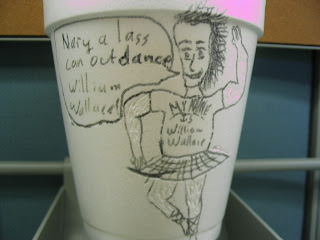 Posted by Andrew at Wednesday, December 05, 2007 No comments:

If You Can't Stand The Heat...

...then come over to our house.

I woke up in a very cold bed this morning. It's November and the weather is getting cooler out, so I thought nothing of the coldness.

When I returned home from work I was greeted at the door by Robin who told me the furnace had died. Wendy said that the house had finally warmed up to 17 from 14. Cooking dinner served to heat the kitchen.

Last night at about 1:30 AM as I was out cold (if you'll excuse the pun) the furnace made a buzzing sound. I did not hear it even though I sleep somewhat close to it. Wendy heard it from her bedroom upstairs. After a brief buzzing sound all went silent. The motor had given up the ghost.

Wendy called the furnace repairman. He had a list of houses to get to first. By the time he got here it was about 9:00 PM. He came downstairs and looked at the furnace. He told us the motor had burnt out and he'd have to go back into Ottawa to get a new one. Then he would return and install it. So it's at least an hour to go to Ottawa and back. Then it'll be an hour or so to replace the part.

He left here at about 9:30. So he won't be back until probably 10:45 at the very earliest. So, we can't expect the job to be done until 11:45. It has been suggested I sleep in Bruce's room. There will be no sleep for me in the basement. I doubt it's a quiet job to replace the motor.

I just took a trip up to Bruce's room. It's flipping freezing up there!

So, here are my options. I can either stay up late and sleep in a quasi warm basement, or I can go to bed soon and sleep in a really cold room. But I can sleep now, instead of 2 hours from now.

What would you do?

UPDATE: The furnace guy returned, installed the new motor, left us with a large bill, and left. I went to bed at about midnight that night.
Posted by Andrew at Monday, December 03, 2007 2 comments: