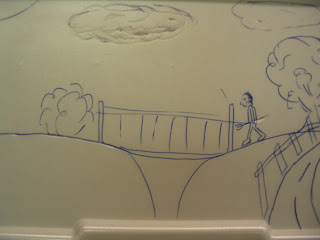 I can't think of anything to write about today's Coffee Cup Art. I'll cross that bridge when I come to it.
Posted by Andrew at Wednesday, May 26, 2010 No comments:

Last year I blogged about my previous moving experiences. It seemed whenever I had to move, I hardly had to look around. There was always an obvious no-brainer choice; a God event. When I went looking last year, there was no obvious no-brainer. There didn't seem to be a God event. Then Jack told me that if I didn't mind uncertainty I could stay with them. It sounded good to me.

Throughout the year, one of the places I looked at kept coming to mind. I would pass it on my drive home from work. I'd be stopped at a light, look up at the building and think "If I had taken that apartment, I'd be home by now."  As it was, I had another thirty minutes to drive.

Last Sunday afternoon it has became clear that I would likely have to move out of the McQueen's house. I began to contemplate my options. Apartment vacancy rates are really low. There are still bidding wars over houses. And there was always a chance I could stay in Embrun. I asked God for His guidance. Like Gideon, I put out a fleece. I asked God for a 1 bedroom apartment in the aforementioned building facing East on either the top or bottom floor coming available in July.

"Oh really. Here's an odd question for you. What direction does that apartment face?"

"Sweet. I'd like to take a look at it." On Tuesday I was shown the apartment. I filled out an application. On Wednesday I was told my application had been accepted. Then yesterday I signed the lease.

There were three things that really attracted me to this apartment. The first was that it was mostly seniors. I really don't want to live in a building with a lot of students. I like to go to sleep at night. The second thing was that the rent was in the right neighbourhood. If the rent is too low, you're asking for trouble. If the rent is too high, I'd be better off owning. The third thing was the location. It's close to almost everything in my life! Here's a partial list of things it's close to:
Now, there are a few things in my life it's not close to:
So, now I get to organize a move. I have to reserve the service elevator. Any volunteers? I don't have a lot of stuff.
Posted by Andrew at Monday, May 24, 2010 No comments: