What kind of toothpaste do you use? Currently, I use Colgate Total. Colgate Total has everything. It protects against cavities, tartar, plaque, gum disease, etc. It's supposed to whiten your teeth too.

Colgate Total is one of the few, if not the only, toothpastes that contain an anti-bacterial called Triclosan. It's supposed to protect against gum disease. But, according to today's article, when triclosan mixes with water, it creates chloroform gas. In small quantities, it won't do anything immediatly. Over time it can build causing health issues, including cancer.

Sometimes things are invented for one purpose, but get used for another. I think preserving memories was a secondary reason for the invention of the camera. This shows the original reason the camera was invented. 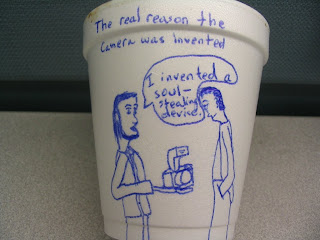 One guy is showing the other "I invented a soul-stealing device."
Posted by Andrew at Wednesday, March 25, 2009 No comments: 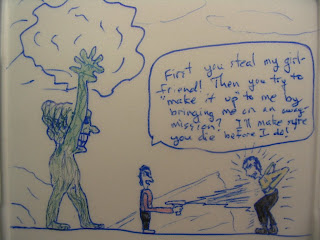 On a foreign planet inhabited by big, green creatures capable of throwing cheap cardboard rocks around, a guy in a red shirt is phasing Captain Kirk saying "First you steal my girlfriend! Then you try to "make it up" to me by bringing me on an away mission? I'll make sure you die before I do!"

Now that I think about it, Captain Kirk should be saying, in reply "Don't phase me, bro!"
Posted by Andrew at Wednesday, March 18, 2009 No comments: 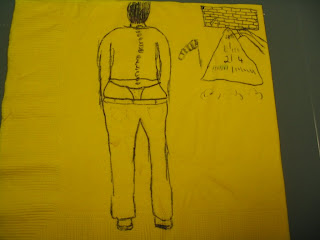 Today's Napkin Art has two parts. The main part is something Jane, Bruce, and I saw whilst we were driving through Embrun one day. This physically-abundant girl wearing low-rise jeans with a thong. We all shuddered. (The tiny circles on her back are vertebrae. They're out of alignment. Most people's backs are out of alignment. See a chiropractor.)

The second picture is a runway with a big brick wall at the end of it. A problem for pilot's to overcome is the standard 50 foot obstacle to climb out over at the end of a runway. This wall must be 50 feet high.
Posted by Andrew at Wednesday, March 11, 2009 No comments:

A while back I wrote that I would describe my church-hopping activities. Here's the first instalment.

On the first Sunday I went to a Catholic church. I was reminded of why I left the Catholic Church in the first place when I was a kid. It's boring. Really boring. The music is slow and emotionless. The sermon was ten minutes long, and sounded like it took about ten minutes to prepare. Of course, the sermon isn't the main point of the Catholic Mass. Communion is.

After "singing" a couple of songs to/about Mary it was soon time to go. As we walked out, hardly anybody talked to anybody else. We shook the priest's hand, through his robe, while he said "good morning" to us, avoiding eye-contact the whole time.

I wasn't seriously considering that church as a new home. A friend invited me. She had come to my church earlier, so I told her I'd go to hers.

The music was good. It wasn't a Brian Doerksen concert, but it wasn't the organ either. The preaching was decent. Not great. Not bad. Mind you, I've been spoiled by Pastor Jack's preaching for the last bunch of years.

Then the College and Career people made sure I had the right numbers and information about their meetings and encouraged me to come out.

The following week I wasn't feeling well, so I went to Bedside Baptist with Pastor Featherpillow. I enjoyed that church, but it didn't do much for my spiritual growth.

Then I went back to Beaver Creek Baptist. I think you need to go to a church a few times in order to make a decision. I had talked up Beaver Creek Baptist with the McQueens. This time, some of them joined me. I told them I'd feel awfully bad if no one talked to them. Almost no one did. I felt bad.

The next week I took Jane with me. She met more people than the other McQueens did the week before. But less than I did when I went alone. Of course, you always meet more people in a group if you come alone. (I'm surprised at how few people know that. They'll show up to a group in their own group, shut themselves off from everyone else, then complain no one talked to them.)

Later, the McQueens said that it was because I was putting myself out there, talking to other people. I told them that I acted no differently than I did at The Meg (a Megachurch in Ottawa). I talked to people there who just looked right past me as though I wasn't there. Greeters don't count towards frienliness, BTW. They're "paid" to be friendly. It's their job. How friendly a church is will be defined by the level of friendliness of the people you meet past the greeters.

Next week I'll check out another church. I'm not sure which one yet. Stay tuned, and find out soon!
Posted by Andrew at Monday, March 09, 2009 2 comments:

Email ThisBlogThis!Share to TwitterShare to FacebookShare to Pinterest
Labels: Church, Cruel Ironies of Life, Life With The McQueens

As a fan of the show Futurama, I often pay homage to it by calling Christmas "Xmas." Christians, who don't watch Futurama, miss the reference and think I'm insulting them and Christ by taking Christ out of Christmas. Once upon a time I thought that too. I thought that the X was crossing out Christ from Christmas.

Then I started studying Greek.

It turns out that the Greek word for Christ starts with the character "chi" (pronounced with a sound that doesn't exist in English). The letter "chi" is written like the English "X". So, writing "Christmas" as "Xmas" is more of a short form. According to Today's Article, this has been going on for centuries. In fact,t he letter "chi" came to represent the word "Christ". The word "Christian" could be written "Xian".

Just like I suspected. This article just confirms it.
Posted by Andrew at Friday, March 06, 2009 No comments: 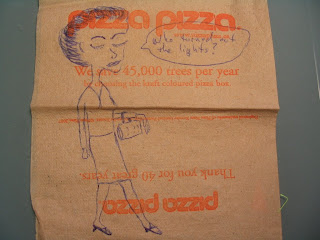 She's walking with her eyes closed saying "Who turned out the lights?"

I figure she's blond. But I didn't have a blond pen, so it came out as blue.

I wasn't at Pizza Pizza that night. For some reason we have a lot of Pizza Pizza napkins at our house.

Or maybe Pizza Pizza is paying me to subliminally advertise for them.
Posted by Andrew at Wednesday, March 04, 2009 1 comment: