This is my 100th Coffee Cup Art post! Here is a couple pictures of coffee cups stacked on my desk at work: 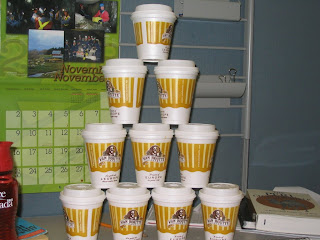 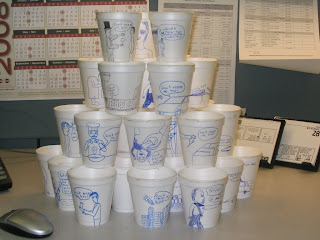 (Yes, that is one desk, and I do have several calendars.)
Posted by Andrew at Wednesday, January 28, 2009 No comments:

Last week I wrote about the OC Transpo strike. I thought someone should check to see what other cities are doing.

Apparently, the Ottawa Citizen agreed with me. In today's article the Citizen looks at how some other Canadian cities do their transit scheduling. You'll have to read the article for details, but my summary is as follows: Ottawa is nuts.

In most places, a driver can expect to finish 12 hours after he starts. He may have a few hours of unpaid break in the middle. Ottawa wants to extend that to 14 hours. None of the other cities listed have that long of a stretch. Right now, some drivers volunteer to take shifts that spread over 14 hours. The city wants to make that mandatory. There's a big difference between volunteering to work a 14 hour spread, and being told to work one.

Right now, drivers are only guaranteed 6 hours of work per day. They want to be guaranteed 8. The city has offered 7. Most cities seem to be around 7.5 hours/day.

I don't agree with the city making someone work a 14 hour daily spread. I think 12 hours is much more reasonable. I think 7 hours of guaranteed daily work is reasonable. So is 7.5. So is 8.

Last week I said I was on the side of the bus drivers. I still am. But I hope the city wins financially. If they don't, then that will set the stage for further negotiations. And if all city employees get big raises, that will likely mean a tax hike for us.
If you go to my blog in a web browser (as opposed to a feed reader), you'll see I've posted a poll you can take to try and predict when the bus strike will end.
Posted by Andrew at Friday, January 23, 2009 1 comment: 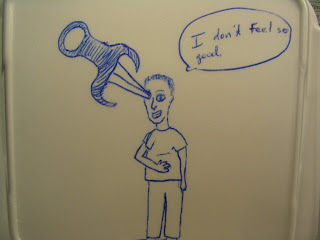 This guy is holding his stomach saying "I don't feel so good." Meanwhile, he has a dagger sticking out of his eye!
Posted by Andrew at Wednesday, January 21, 2009 No comments:

One Strike and We're Out!

As I write this, Ottawa is in the midst of a transit strike. Our bus service, OC Transpo, isn't running.

The main sticking point is scheduling. The city wants to take control of driver's schedules. The union wants the drivers to keep control.

My first reaction is "What?! That's absurd! Scheduling is a management duty! I'm totally with the city on this one!"

I was not alone in that. According to Today's Article most people surveyed are on the side of the city.

The cities politicians are in an enviable position. They can allow this strike to go on without fear of losing votes over it. (There are plenty of other ways for them to lose votes!)

Ottawa is the only city in North America, so I've read, that allows drivers to take control of their schedules. In every other city, it's a management duty. In 1999 the driver's took a 2% pay cut for the privilege. They claim that giving the city control over schedules will ruin the personal and family lives of the workers.

So, why would the drivers be so adamant about holding on to scheduling? Why are they so dead set against the city taking control of it? I can think of two possibilities:
Which is more likely?

The drivers took a pay cut in order to get scheduling control. This isn't a very whiny thing to do.

Having been an OC Transpo rider for a few years, observing how the bus schedule is done, I lean very heavily towards the second option. From what I've read in the news, this is the case.

So, I've changed my mind. I'm on the side of the drivers for now.

It seems to me that there has to be a third option. I don't think this is an issue in other cities. The city has one specific idea of how things should be done. The union has another. There's got to be a third. And a fourth, and a fifth. And so on.

Sometimes, in an argument with two sides represented, the debaters become blind to other possibilities. I have to wonder if I that's what's happening here. I wonder if anyone has thought to ask other cities what they do?
Posted by Andrew at Friday, January 16, 2009 No comments: 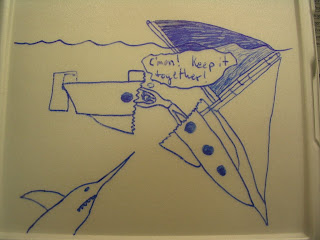 In case you can't make it out, it's a guy holding onto both parts of his sinking ship thinking "C'mon! Keep it together!"

He's about to be pierced by a sword-shark.
Posted by Andrew at Wednesday, January 14, 2009 No comments:

This is a picture from The Lion, The Witch, and The Wardrobe. The Queen is asking Edmund (yes, he is there, hidden amongst the trees) "Are you a son of Adam?" Edmund replies "Hardly! I'm an evolutionist!" 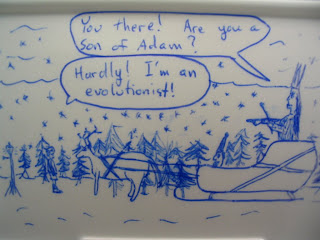 When I started drawing the trees I discovered a way to draw the trees that shouldn't turn out to look like trees, but do. I got carried away. The next thing I knew, you could hardly see Edmund any more.
Posted by Andrew at Wednesday, January 07, 2009 1 comment: