This Is Within 100 Miles Of Bordering On Insanity

Americans are usually protected by their constitution from things like random searches, detainment, etc. without a warrant or probable cause. These rights don't exist at the border. As anyone who's visited the United States from away knows, they, their car, their suitcases, etc. can be searched by border patrol officers.

Now, according to today's article, the American government says that the border exists from the actual border to anywhere within 100 miles of that border. According to the U.S. Census Bureau, two thirds of Americans live within 100 miles from a border. So, two thirds of American citizens are subject to random searches, as though they were entering the country.

If you want to know if that includes, you, the ACLU provides a map of the "constitution-free zones".
Posted by Andrew at Friday, October 31, 2008 No comments:

Email ThisBlogThis!Share to TwitterShare to FacebookShare to Pinterest
Labels: The Best Country in America, Today's Article 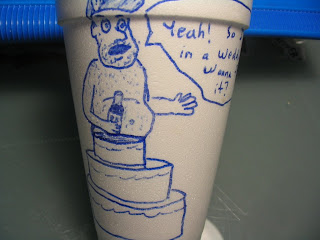 How would you like to see this at your bachelor party? It's a guy saying "Yeah! So I live in a weddin' cake. Wanna fight aboud it?"
Posted by Andrew at Wednesday, October 29, 2008 No comments:

Today is Election Day in Canada. I just returned from performing my "civic duty."

A few weeks ago I was talking with a friend about politics. They readily admitted they neither knew nor understood many of the issues pertinent to this election. They did not understand the platforms of the different parties.

I talked with that friend again today before we each voted. This person knew which party they were going to vote for. I asked if they had read the party's platform, or any of the other party's platforms. They hadn't. I asked if they had done any research to better understand any of the issues pertinent to this election. They hadn't. I said "So then you're on your way to inflict your ignorance on Canadians?"

I didn't feel good about this person voting because they admitted that they didn't understand many, if any, issues. (I think they picked the party because someone they respect picked that party. It seemed like this other person was getting two votes; theirs, and my friend's.)

Suddenly I didn't feel good about me voting. I was about to inflict my ignorance on the people of Canada.

Note to Canada: If the person I voted for gets elected, and things don't turn out well, I'm sincerely sorry.

As I stood in line I wondered how many people there understood much about Canadian history, law, and political system. I took several Law courses in university. I think the average Canadian's understanding of the legal system comes from having watched Matlock in a bar last night. The sound was off, but they think they got the gist of it.

You're average person can't program their VCR. How can they make an intelligent decision on how to reduce our dependency on fossil fuels? How can they decide which is the better monetary policy to help us through these tough economic times?

People say "If you don't vote, you can't complain."

I assume that each of the major parties receive votes from smart, well informed people. If that's true, then intelligence and informedness don't seem to actually contribute to making good electoral decisions.

Of course, we probably make our voting decisions the same way we make most decisions: non-rationally. Thats why the tall guy with better hair usually wins.
Posted by Andrew at Monday, October 27, 2008 No comments:

These Laws Are Driving Me Crazy!

Lets look at some anecdotal evidence to support my opinion that harsher sentences don't deter crime, shall we?

First: The Safer Roads to a Safer Ontario Act.

One year ago, Ontario passed the Safer Roads to a Safer Ontario Act, A.K.A.: The Anti-Street Racing Act. If caught going more than 50 km/h you can face fines ranging from $2 000 and $10 000, your license being suspended on the spot, your car being impounded on the spot, and even jail time.

I'd call those pretty tough measures. If I was in a hurry, I'd be keeping that speedometer needle at no more than 49 km/h above the posted limit. If you think tougher laws lead to changed behaviour, you might expect to see a marked decrease in the would-be deterrent law. The desired effect of this law was to reduce traffic related deaths. If tougher laws work, we should see less traffic related deaths.

That reduction could have come from anywhere. According to this article Canadians drove less in the past year than before. All things being equal, less cars on the road logically means less accidents.

Many Canadians would agree Canada is too soft on youth crime. If that's true, and if it's true that harsher sentences would deter youth crime, then we should see a much higher crime rate for kids than adults.

A few years ago the government passed the Youth Criminal Justice Act. When I was studying law in university, we had a guest speaker come in to explain that new law to our class. I can't remember if she was a judge, a justice of the peace, or a crown attorney. Anyway, she was more of an expert in the law than I'll ever be. She explained how the new law was designed to find alternate justice for convicted youths. Try to keep the kids out of prison. Our class was in shock. "The kids will be running amok in the streets knowing they have a free pass!" was the general sentiment in the class.

According to Statistics Canada, the youth crime rate dropped after that law was passed.

Note about statistics: In an uncontrolled environment, like the real world, it's really hard to determine cause-and-effect relationships. Laws are passed to change people's behaviour. To see if a law is effective, after the law is passed, watch people's behaviour. The best way to do that is with statistics. But statistics don't show causation. They only show correlation. The best you can hope for is a strong correlation.

For example, the 12% drop in traffic-related deaths looks pretty low to me. I'm not a statistician. It might actually be really good. I don't know. People might be slowing down because driving fast uses more gas. Gas has been expensive this year. Maybe there has been less deaths because cars are being built to be more safe. Perhaps, with more people buying smaller cars (due to high fuel prices) people are being hit with compact cars instead of big, heavy trucks. Maybe that has something to do with it? I don't know. Nobody does.

Frankly, I'd like to see at least a 50% reduction in traffic-related deaths following the enacting of such a law. Something significant. Even that would be a win/lose situation. On the one hand, less people would be dying in traffic accidents. On the other hand, I would be denied the pleasure I derive from being right.
Posted by Andrew at Friday, October 24, 2008 No comments:

I drew this bit of "Pew Art" when Pastor Jack was preaching out of Exodus on the time the Hebrews worshipped the "Golden Calf". 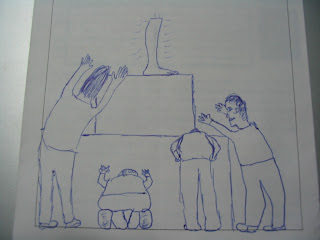 Posted by Andrew at Wednesday, October 22, 2008 No comments:

According to today's article the timing for the Bee Gee's popular disco song, "Stayin' Alive" is almost exactly the right timing to use when chest compressions giving someone CPR.

"Stayin' Alive" is good because "...Everybody's heard it at some point in their life. People know the song and can keep it in their head."

The article does not mention if you need to inhale helium to make your voice go as high as the Bee Gee's lead singer when giving the mouth-to-mouth portion of CPR.

BTW: Don't use the version played in Airplane (the movie). It is over 10 beats per minute faster than the record version.
Posted by Andrew at Friday, October 17, 2008 1 comment: 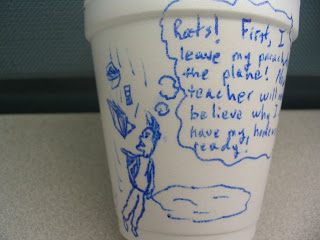 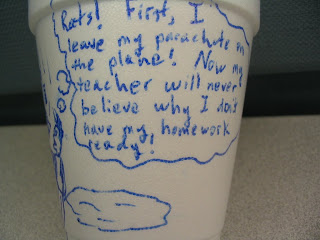 The unlucky skydiver is thinking "Rats! First I leave my parachute in the plane! Now my teacher will never believe why I don't have my homework ready!"
Posted by Andrew at Wednesday, October 15, 2008 No comments:

If you've been following my blog lately, you've noticed a certain theme in my coffee cup art.

I've been spoofing the "Don't taze me, bro!" meme. I have found that many people are unaware of this meme. It comes from the following video:

And to prove it's a meme, check out this User Friendly comic.

In case you found that video to be a bit disturbing, check out this one. It should lighten the mood:
﻿

To recap, here is a list of all the variations on the theme I did: 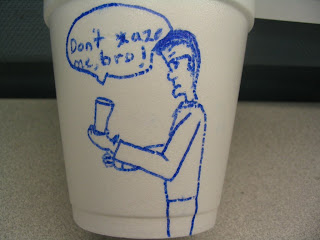 The coffee cup is saying to the artist "Don't *aze me, bro!"

And so ends the "Don't *aze me, bro" series. There will be a bit of an explanation on Monday's post.
Posted by Andrew at Wednesday, October 08, 2008 No comments:

A few weeks ago, I posted a Coffee Cup Art piece with a bonus question. I asked what that piece was making reference to.

It's supposed to be a picture of the Battersea Power Station in London, built along the River Thames. That's where the pictures for the artwork of Pink Floyd's Animals album were taken. The picture I used when drawing this can be seen here. 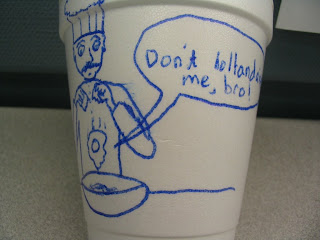 The egg is saying to the chef "Don't hollandaise me, bro!"

A Hollandaise sauce is a sauce made with eggs, among other things.
Posted by Andrew at Wednesday, October 01, 2008 No comments: