The Dangers of Bisphenol-A

According to Today's Article the government of Canada intends to ban baby bottles built with the chemical Bisphenol-A (BPA).

They haven't completely banned the use of BPA because our usual daily exposure isn't high enough to warrant concern. But, for babies, the margin should be greater.

BPA can be found in plastic drinking bottles, the lining of tin cans, CDs, and other electronics.

However, there is another source of BPA that I haven't seen listed in any of the articles I've read.

Dental fillings and sealants are made from BPA derivatives. They're white, and the shade can be matched to your teeth colour. You cannot tell if you have a resin filling simply by looking, if it's done right. The traditional amalgam fillings are silvery and are quite visually apparent.

Sealants, in case you haven't been to the dentist in a while, are made of BPA derivatives, like fillings. Dentists put them in the pits of your molars where food, bacteria, and acid are likely to settle, and where your tooth brush is unlikely to clean out. They put the sealant in there to make sure you don't get cavities. It's a lot cheaper than a filling. My dentist put 7 sealants in my mouth recently. All 7 of them cost less than one filling.

In the hours following the fillings or sealants, some BPA can be found in the saliva.

Before you run out and get your BPA fillings replaced with old-fashioned amalgam, read about the risks of amalgam fillings. Summary: Amalgam filling have been linked to multiple sclerosis, muscular dystrophy, Lou Gerig’s disease, chronic fatigue syndrome, arthritis, Alzheimer’s disease, and the notion of a winter sport being played in June isn't just alright, it's a good thing.

Compare that to this article which says that after a day no BPA was found in the saliva of patients who received dental sealants, and the amounts of BPA were 50 000 times smaller than the maximum BPA limits.

That article was from www.bisphenol-a.org so it may be a bit biased. Here's another study that's not so optimistic.

After a few days my one filling really started to hurt when I ate. My dentist shaved it down (something that probably can't be as easily and safely done with amalgam) and now it hurts a lot less. I could probably get it shaved down some more, but I'm thinking about leaving it there as a painful reminder to have a better diet for my teeth.

It would be better to have your amalgam fillings replaced with the composite resin fillings and live with the small amounts of BPA you might get. I'm not sure how easy or expensive that would be. I'll talk to my dentist the next time I'm there.

As for sealants, lots of dentists recommend them. If you search the internet you're going to find lots of pages singing their praises. Most of these pages are written by dentists, so they're somewhat biased. When reading stories from people who have had them, the story seems to be a bit different. If the sealant isn't put in just right, if one thing goes wrong (the tooth isn't dry enough, etc.) then cavities can form underneath the sealant. Those cavities are very hard for the dentist to find. They cannot be visually identified. Some web sites say that even the x-ray won't find them. You have to wait for the sealants to come off on their own, then you may find them. (Other sites say that it takes an x-ray to see the sub-sealant cavities.)

Let's not forget, when the sealants start to wear down, they will come apart in bits, and you'll likely swallow them. That's a lot of BPA at once. When the sealants break down, it's a wonderful opportunity for bacteria and acid to settle underneath the sealants, where your toothbrush can't get to.

Here's a page with a few anecdotal stories of how sealants ruined teeth.

One more thing to keep in mind: BPA is not water soluble. So it's fat/alcohol soluble. Think about that the next time you take a swig of wine out of your plastic water bottle.
Posted by Andrew at Friday, April 25, 2008 2 comments:

This week, instead of a Coffee Cup Art, I have news relevant to my coffee cup art. According to Today's Article, Turner Valley, a town in Alberta has decided to ban the use of Styrofoam. Styrofoam is made from petroleum. This ban is good for the environment, but bad for my art. (Although, it could make my art even more valuable!)

Mind you, I don't live in Turner Valley, or even Alberta, but it is possible this could turn into a trend. Despite the lack of canvas I would have to work with, I'd be in favour of the ban. We have a limited supply of oil left in the world. We need to try to save any way we can. Drive a Toyota Corolla instead of a Hummer. Dry your clothes on the clothesline instead of the dryer. Turn out the lights when you leave a room. Try minimize the time your fridge/freezer are open. Make sure your house isn't leaking heat. Only turn on your air conditioning at night, for sleeping comfort.

Now, if you'll excuse me, I have to engage in my latest pleasure. I'm off to the airport to fly.
Posted by Andrew at Wednesday, April 23, 2008 No comments:

A Full House With No Royal Flush

When I got home on Friday night I had a long list of things I wanted to do that evening. When I walked in the front door, the toilet from the downstairs washroom was sitting in several pieces strewn from the washroom into the surrounding hallway. There were also several buckets, tools, and towels lying about.

So much for my to-do list. I knew I'd be helping out with the toilet for the night.

Jack was out. Wendy told me about their day. They found out the toilet was leaking, dripping into the basement. (For the first time I was actually glad I was living upstairs instead of the basement.) Jack was out getting replacement parts. We needed a new wax ring to sit in between the flange and the floor. Wendy was watching toilet repair videos on the internet.

Robin was having some friends over that night for a sleepover. They planned on sleeping in the basement. We were also having a bunch of lunch guests on Sunday. This was a situation with no easy solution, with a promise of comedy.

When Jack got home, he and I put the new wax ring down, and reassembled the toilet. Jack went to the basement to watch the pipe as I poured water down the toilet, simulating a flush, to see if it would leak. It did. Big time. (We had buckets, and a plastic sheet downstairs to catch the leak.)

We realized the problem was that the flange was sitting too low in the floor. We needed a new wax ring, and possibly a flange extension. It was too late. Rona was closed.

We bought the parts we needed on Saturday, but didn't have time to fix the toilet. On Sunday night as I was on my way to bed, Jack installed the new parts, and reassembled the toilet. Wendy flushed as Jack watched the pipe in the basement for a leak.

So our toilet was out of order for the whole weekend, so I've been holding it all in since Friday afternoon. If you'll excuse me, it's time for me to go.
Posted by Andrew at Monday, April 21, 2008 No comments:

Email ThisBlogThis!Share to TwitterShare to FacebookShare to Pinterest
Labels: Life With The McQueens, My fish died today

"A fatal attraction is holding me fast
How can I escape this irresistible grasp?"
-Pink Floyd's "Learning to Fly"

A couple of weeks ago I decided to try to get my pilot's licence.

Last week I got my CAT III medical. My first flight was yesterday. It was a pretty simple flight. The instructor did the take-off, landing, and some attitude demos. I did some climbs, descents, turns, and cruises. The instructor said that next time I would do the take-off and landing.

It has been several years since I was in a small aeroplane. It was good to get back in the saddle again. But I was disappointed by how much I had forgotten. At first, it took me hours to get comfortable talking on the radio. Then I finally got it. Yesterday I saw that I had lost it. I hope it won't take long to get it back again.

I also forgot how to climb and descend. (For the non-pilot's reading this, it's more complicated than "pull-back to climb, and push forward to descend.".)

On the upside, it's a lot less stressful than Sault College. For one thing, I'm learning at my own pace. I take as much, or as little, time as I need. If I mess up I don't have someone biting my head off. But I do miss the Sault College aeroplanes; Zlin 242Ls. They're more roomy than the Cessna 150. They also have more equipment in them. The Zlin had more switches, knobs, dials, etc. It made me feel smarter when I knew what they all did. They were aerobatic aeroplanes, which allowed you to do more with them; turn at steeper angles, endure higher G-forces.

I also miss not having to pay for flying. Flying is expensive!! At Sault College, I just paid tuition like everyone else. At the time I think I paid about a thousand per semester. The provincial government paid the rest (about $35 000 per student). If I flew everyday now, I could drop a thousand in a week. Not to mention the medicals, the books, the head-set, the tests, etc. If you're looking to fly, you could spend $1000 before seeing the inside of an aeroplane.

For the summer, most of my "free time" will be consumed with flying. So, I'm sure you'll read more about it on my blog. Once I get my camera fixed or replaced, I hope to get pictures, and maybe some video's, up on the blog.

Here is a list of things I need to do to get my licence:

Email ThisBlogThis!Share to TwitterShare to FacebookShare to Pinterest
Labels: In The Air, My fish died today

Also, from the article, Ottawa-Gatineau has the fewest driving commuters. Instead people take the bus, or bike, or walk. I can see why. Driving in downtown Ottawa sucks! Too many one-way streets. Too many "No Left Turn" intersections that make no apparent sense. Highway exits that you can only get to going in one direction.

It also turns out Ottawa is one of Canada's healthiest cities. I noticed that right away when I moved here from Sault Ste. Marie. A lot of people walk/run/inline-skate along the canal.

Oddly enough, the Quebec Outaouais region is the most obese region of Quebec.
Posted by Andrew at Friday, April 11, 2008 1 comment:

My camera broke a few weeks ago. Until I get that situation taken care of, I can't post any new coffee cup art.
Posted by Andrew at Wednesday, April 09, 2008 1 comment:

According to Today's Article 4 water myths have been debunked by a couple of kidney experts.

Also, note that drinking too much water at one time can cause your brain to swell, and you die. Also, apparently, long distance runners do more damage to their body by over-drinking than under-drinking.

The elephant is thinking "There must be peanuts in here somewhere." 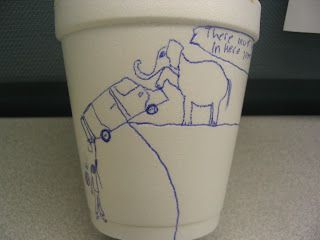 In case you can't see it, that's a guy hanging out the back of the van.
Posted by Andrew at Wednesday, April 02, 2008 No comments: